Wasps vs aircraft - who wins?

In a team effort to mitigate risk, Brisbane Airport Corporation brought in Ecosure and Eco Logical Australia (ELA) when a South American mud wasp chose to nest in a very sensitive area of an aeroplane. Read Principal Ecologist, Dr Alan House’s research on the project that has recently been published.

Flying has long been considered the safest form of mass transport. Estimates vary, but one study from the US National Safety Council has listed 1 in 205,552 fatalities occur in a plane crash. That’s in contrast to 1 in 4050 whilst riding a bicycle, and 1 in 102 in a car accident – Research here.

Air travel has increased in safety due to dramatic improvements in the technical capabilities of modern aircraft, the high standard of training and professionalism of pilots, tight regulations and rigorous systems for maintenance and repair. Events that affect aircraft safety still include freak weather conditions, poor human judgment and, sadly, mental health issues in pilots and malicious motives in terrorists.

Also responsible for air catastrophes is wildlife, mainly bird strike (a collision between a bird and an aircraft). The famous Miracle on the Hudson, in which Captain “Sully” Sullenberger landed a fully loaded plane on the river in New York with no loss of life, was caused by collision with a flock of Canada geese. Much effort and research are spent on managing the risk of bird strikes at airports around the world as collectively it costs the aviation industry around US$2 billion per year in repairs, replacements and delays.

So, what about other forms of wildlife? In Australia a novel threat has emerged – the Brazilian keyhole wasp (Pachodynerus nasidens). This is a relatively small wasp that is a mud-nester (i.e. build nests from mud), but prefers to use existing cavities such as keyholes (of course), recessed bolt holes and small exhaust pipes to save time and effort. Unfortunately, at Brisbane Airport it also likes pitot probes on aircraft. 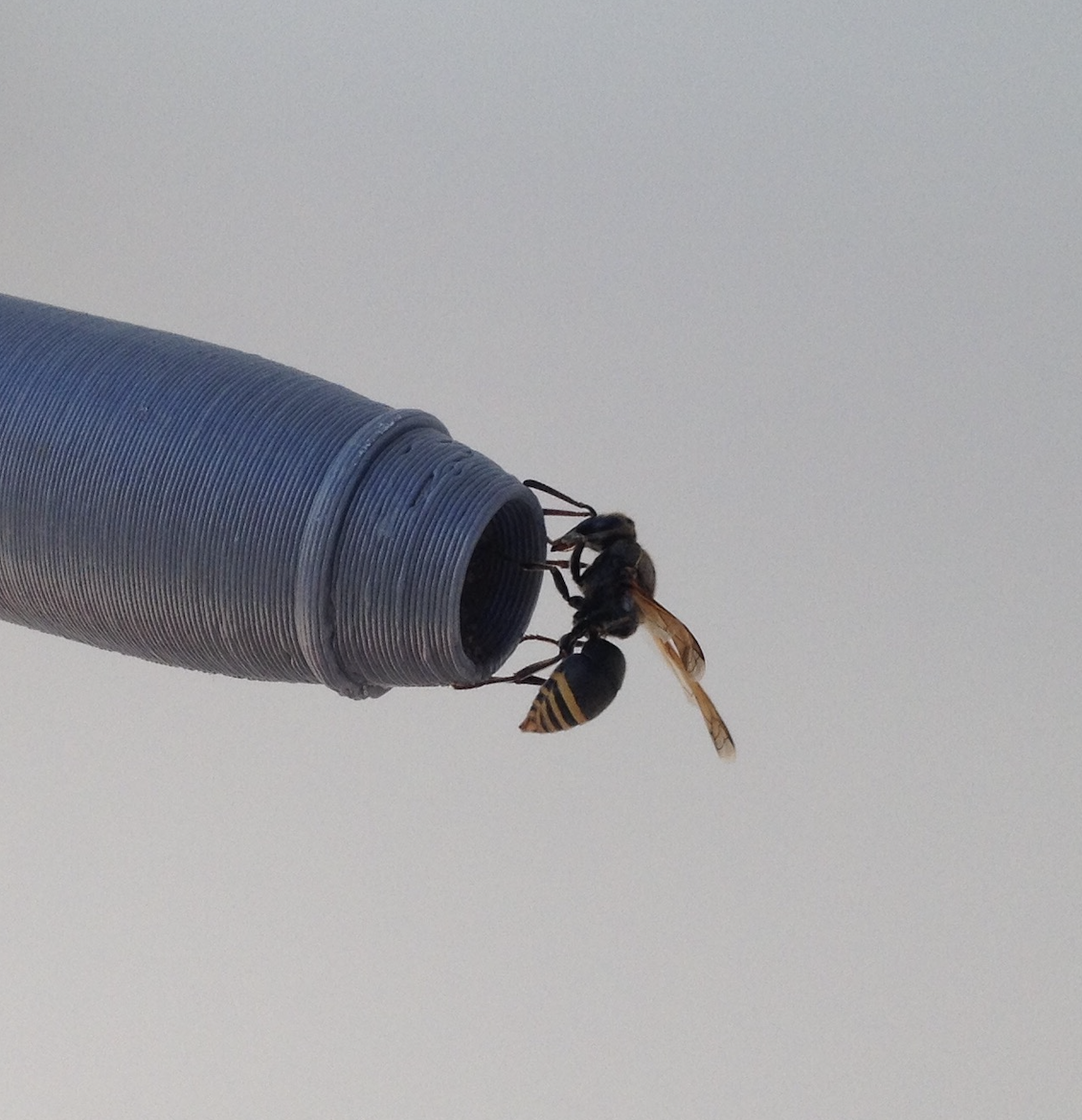 Pitot probes are the small hollow instruments that poke out from the nose of all aircraft. They measure airspeed by contrasting the air pressure entering the probe with a static pressure. They are one of the few remaining analogue instruments on aircraft, and airspeed is the most critical aspect of flying that pilots rely on instruments for. If the probes are not working, the consequences can be very serious. 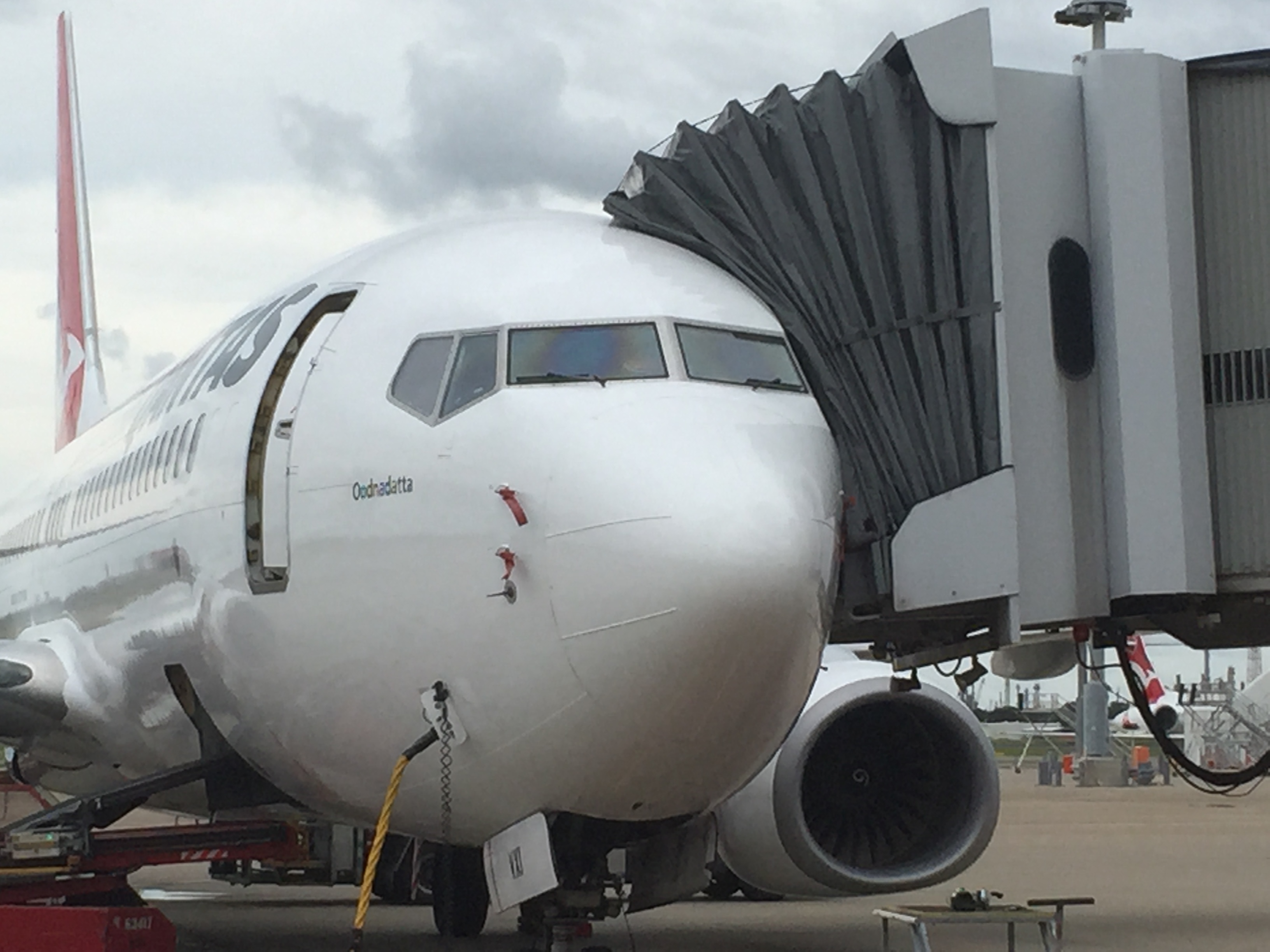 Pitot probes (with red protective covers) on a Boeing 737

To mitigate risk and ensure the safety of all passengers, in collaboration with Ecosure, Brisbane Airport Corporation and Qantas, Alan designed an experiment to determine where on the airport was most affected, what aircraft type were most susceptible, what seasonality there was in nesting, and how risks might be reduced.

The results of the 3-year study are now published in two papers. The research has shown that not all aircraft are targeted by the wasps, and not all areas of the airport are at the same risk. Although native wasps can also use man-made cavities for nesting, only the keyhole wasp does so in pitot probes. Simple measures, such as covering pitot probes on arrival, can reduce the risk of a wasp-related incident dramatically. 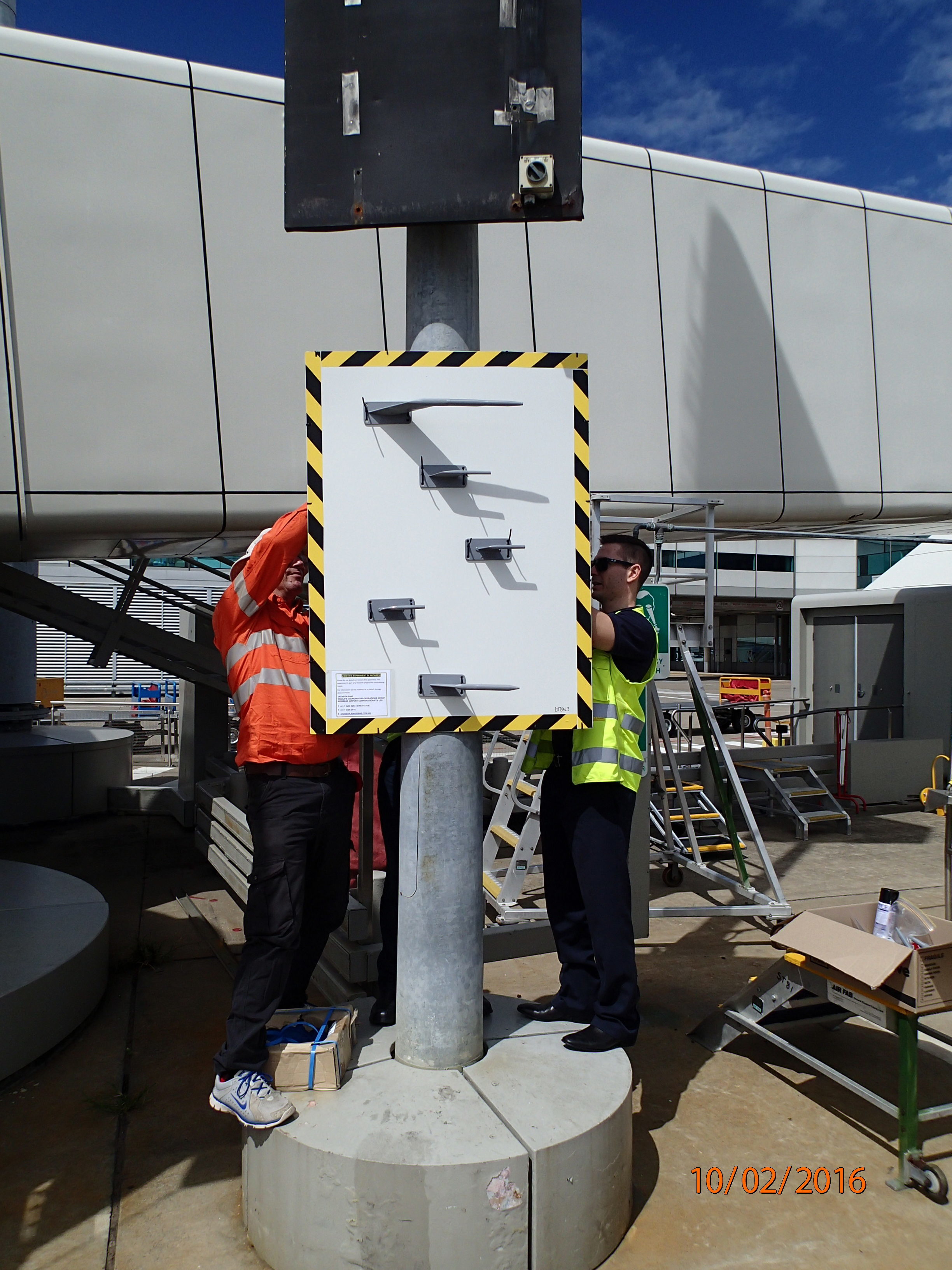 Bob Johnston from Ecosure and Jackson Ring from Brisbane Airport Corporation installing a panel in 2016.

“The short story is that yes, there is a hotspot on the airport. The wasp unfortunately does prefer pitot probes on the most common aircraft at Brisbane Airport, and the nesting season has become longer as the species establishes itself and summers get warmer. There are simple ways of reducing the risk, and these appear to be working. The collaborative efforts of the Airport, airlines, aviation authorities and science and have resulted in a good outcome for travellers”, said House. 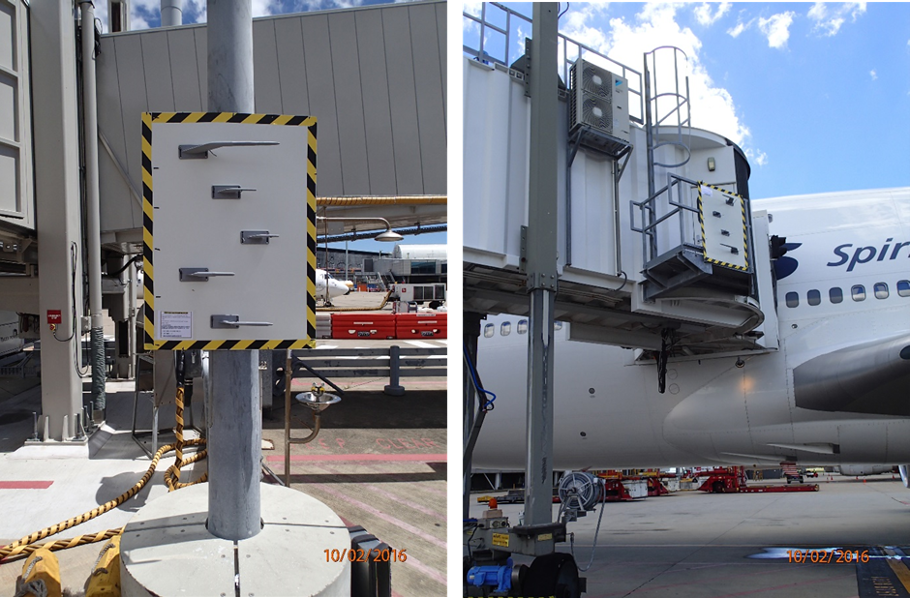 “The cost of not doing anything far outweighs the cost of efforts to manage it. At present it is only a problem in Brisbane, but this species is an accomplished world-traveller and could turn up anywhere on the eastern seaboard in Australia or further afield”.

“I’ve worked all over the world on the birdstrike risk, but this is the first time I’ve been involved with insects as an aviation threat. This ground-breaking research is really important for aviation safety” said Phil Shaw – Managing Director of Ecosure and co-author on the papers.

This work is the first to research how an insect can be a major threat to aviation safety. The findings of the research will enable airport managers and airlines to assess the risks to their operations and respond respectively, to ensure the safety of all passengers. This is a great example of how ecological science can be applied to risks to public health and industry to deliver insights that can mitigate those risks. ELA are pleased to have been able to partner with Ecosure on this valuable research. It demonstrates our commitment to providing clients with innovative solutions, where nature meets humanity head on.

Nice to get to know you a little Alan!

Got a project that needs ecology expertise?