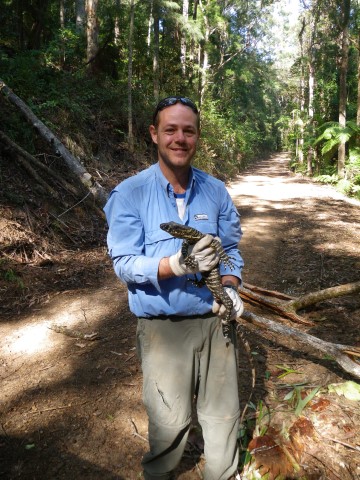 Our senior botanist Dr Lachlan Copeland (pictured) is often called upon for his almost encyclopaedic knowledge of Australia’s native plants. Over his 20 years of experience he has been responsible for discovering about 25 new plant species as well as publishing the revision of a large genus, and naming/describing no less than 22 species to date.

The Oxley Wild Rivers National Park, east of Armidale in NSW is one of the most diverse national parks in Australia and is home the Macleay Gorges. The area is a hotspot for rare and threatened plants, and because it’s rugged and dramatic waterfalls and gorges are difficult to access, several unique plant species have only just been discovered there in the last few years.

While surveying the bush there over a period of 15 years of fieldwork for NSW National Parks and Wildlife Service (NPWS) and Eco logical Australia, Lachlan has become quite familiar with its local plant residents. He has recorded an amazing 1160 plant species in the park and has been lucky enough to discover six new species.

The Walcha office of the NSW NPWS has kindly funded a project with ELA for Lachlan to nominate three of these species as threatened on the NSW Threatened Species Conservation Act as they are not currently listed in any legislation. Among these reclusive and undiscovered natives are two shrubs and a sub-shrub (one of which is pictured) which will soon be thrust into the spotlight thanks to Lachlan.

The next steps for Lachlan involve naming and writing descriptions for at least one or two of these exquisite flora before passing the rest onto a taxonomist who is a specialist in that particular group. The taxonomist’s job is to identify, describe and arrange species into classifications, including those that are new to science. After a rigorous review of the evidence the Scientific Committee will then hopefully list these species as threatened which is kind of a big deal.


Once published, this will ultimately mean measures will be taken to protect these rare plants in all their native glory from further threats such as goat browsing and frequent wildfires. No plans for Lachlan to call any of them Lachlafolia at this stage, apparently this type of practice is very uncool - hardly any Australian botanists have dared try it for at least 200 years!