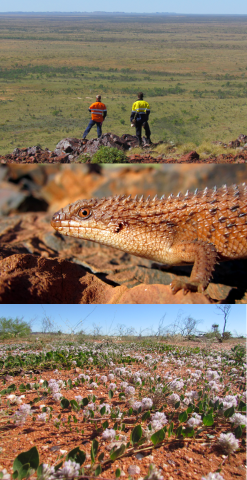 In 2014 our client the BHP Billiton Western Australian Iron Ore team identified an opportunity to use big data to improve biodiversity management in the Pilbara, a region in Western Australia which is considered a national biodiversity hotspot and home to some of Earth’s oldest rock formations, dating back two billion years.

They came to us with an ambitious task, asking us help them assess the potential cumulative impacts of their Pilbara Expansion at a regional scale during 100 years of operating life on Matters of National Environmental Significance (MNES). Given that globally or nationally, no consistent methodology for quantifying cumulative impacts has been established or widely accepted, we were excited to be involved in this innovative and ambitious project.

Using industry first techniques developed specifically for this project we then assessed the potential impacts specific to each species as identified from the Department of Environments Species Profiles and Threats Database (SPRAT) and the outcomes of workshops facilitated by the WA Department of Parks and Wildlife in 2013. Our findings suggested that the greatest potential threats to these five Commonwealth listed species across the Pilbara were historical grazing and the potential future impacts of climate change.

Together with our supportive client, we were able to take a bigger picture approach, going beyond just measuring impact or looking at one issue in isolation. The client is now using our findings to inform future management and improve ongoing sustainability of its operations in the Pilbara. By considering how multiple existing and future environmental impacts might interact across such a huge landscape and timescale we did something no-one had ever done before. As a result, BHP Billiton can now quantify the key potential impacts that are important on a regional and long term scale and make more informed decisions.

For more information, you can check out BHP Billiton’s Pilbara Strategic Assessment here which we are proud to have contributed to.

And a short video outlining the project can be found here.