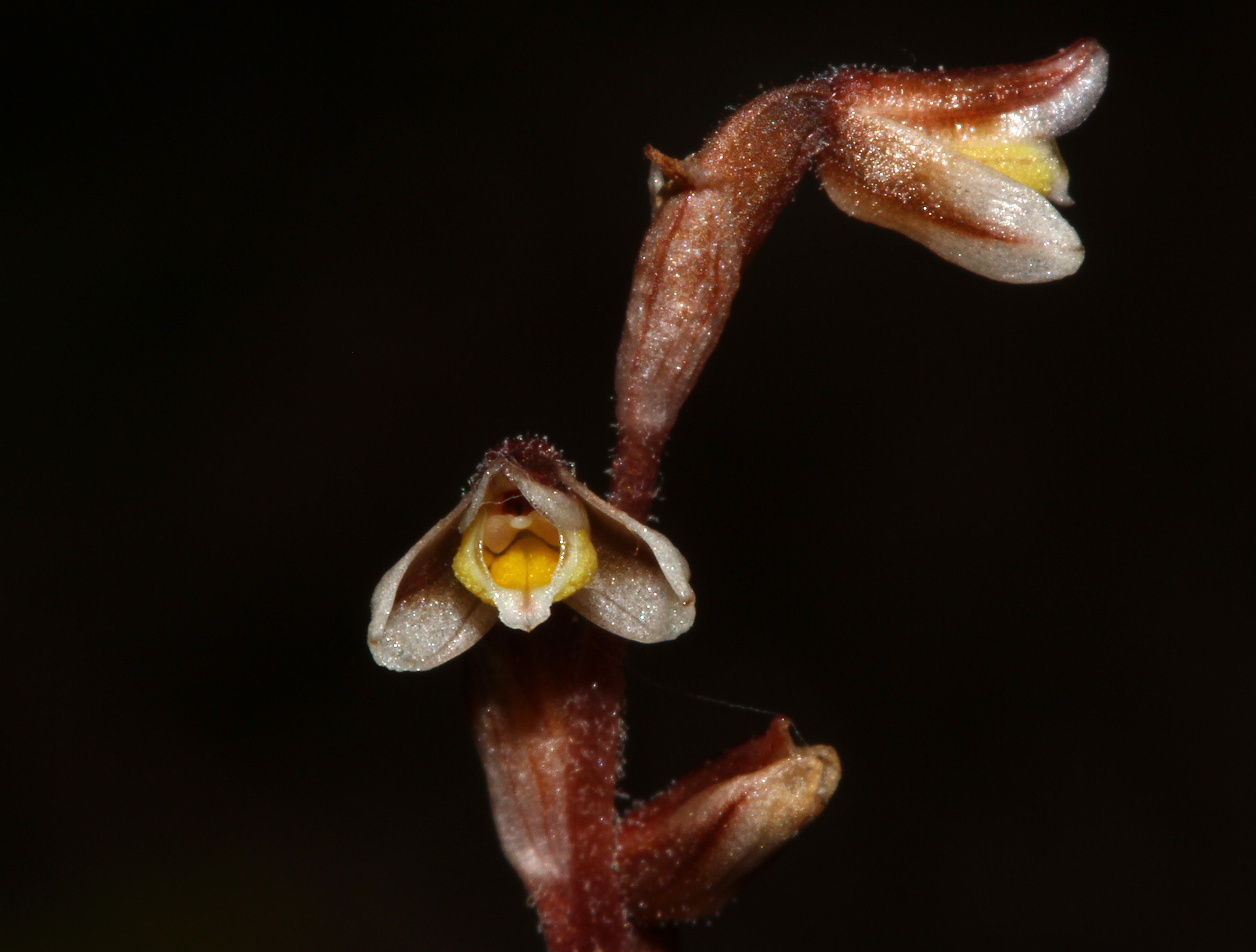 In an almost unbelievable turn of events Senior Eco Logical Australia Botanist Lachlan Copeland has discovered yet another unique species of orchid…this time in his own backyard.

In 2017 while conducting a survey in Northern NSW as part of a project funded by the NSW Office of Environment and Heritage, Lachlan was delighted to unexpectedly discover a completely new species of orchid. The orchid (Prasophyllum copelandii) has since been named after Lachlan.

This time Lachlan has discovered a new species while walking through his very own property in Coffs Harbour. We caught up with Lachlan to learn about his latest discovery.

Tell us about how your discovery came about?

In late October 2018 I went for a stroll down to the rainforest patch on my property near Coffs Harbour. It’s a beaut bit of forest and one of the reasons I bought the property. I have walked through it many times before and know every plant in it by name, however on this day I was surprised to see a small ground orchid flowering. I knew straight away it was different. It certainly wasn’t apparent on other visits and had come up and flowered very quickly following some recent rain. I recognised the genus immediately as Danhatchia, a very poorly known genus only discovered in Australia recently and known from just a single species with two populations in NSW. I could see this one was quite different though and after a bit of homework (literature review, discussion with other orchid enthusiasts, etc.) it was confirmed as a new species. I was by myself on the weekend I discovered it but soon shared my find with some friends and other botanists, some of whom rushed over to see the new orchid. 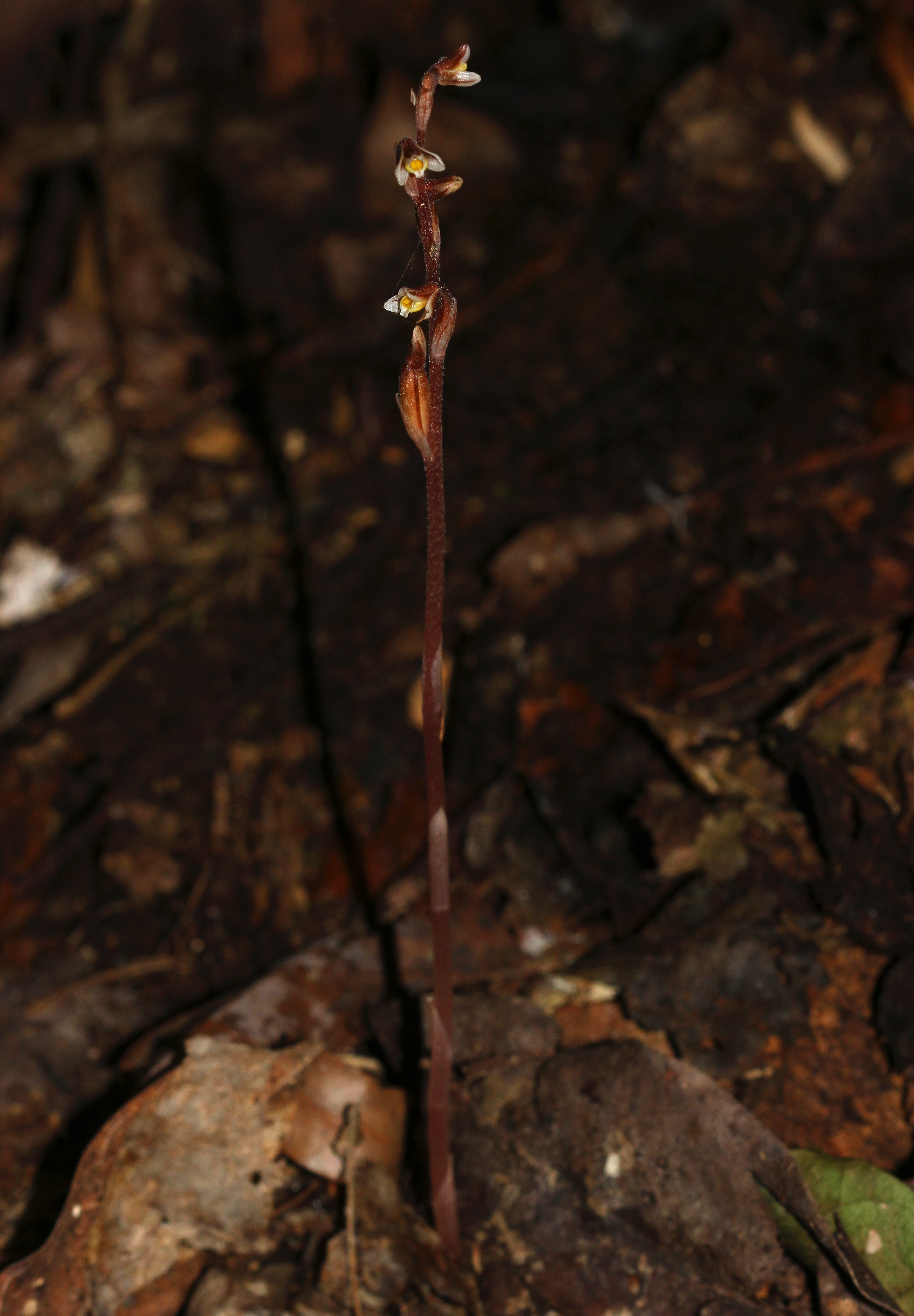 What is the significance of this discovery?

The genus is very rare and cryptic and few Australians have ever seen a Danhatchia species before. They are tiny plants with brown stems so blend into the background of fallen leaf litter. The only other species in Australia (Danhatchia novaehollandiae) is self-pollinated and the flowers do not even open. In contrast, the new species near my house has flowers that open beautifully and have several other features that suggest it is insect-pollinated (e.g. a labellum midlobe that acts as an insect landing pad, long-lasting flowers, and abundant nectar). It is also a mycoheterotroph meaning that it has no leaves, no chlorophyll, and doesn’t photosynthesise. Instead it gets all of its energy by parasitising a fungus beneath the soil, which is a very uncommon trait in the Australian flora. On a personal note finding a brand new, highly distinctive species literally within 100m from my house, and on my own property, is particularly exciting!

What happens with your discovery next?

A fellow orchid researcher and I are currently writing this species up for publication. We will describe and name it sometime in early 2019, and following that I will nominate it as a threatened species under both state and federal legislation. I spent a good deal of time surveying this species with some friends and we ended up finding a grand total of just 22 individuals! Anything with less than 50 individuals is traditionally considered “critically endangered”.

You clearly have a fondness for orchids, how did this develop and why? What excites you so much about orchids?   I first became interested in native orchids in the mid 1990’s and have been captivated by them since. I’m into all plants and animals but have specialised in native orchids over the years and travel widely in my so-called spare time in pursuit of new species to see and photograph. Their rarity, diversity, unpredictability and exquisite beauty keep me coming back for more.