Unearthing rich history during an archaeological dig in Cyprus 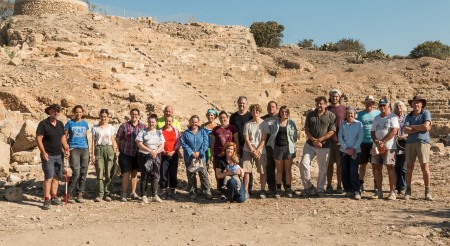 The Paphos Theatre Archaeological Project, directed by Dr Craig Barker, works at the site under the auspices of the Department of Antiquities of the Republic of Cyprus and is supported in its work by the Australian Archaeological Institute at Athens and the Nicholson Museum at the University of Sydney as well as a number of private donors and supporters.

The ancient theatre is the oldest in Cyprus and dates to c. 300 BC. It is located in Paphos, Cyprus and is part of a World Heritage listed archaeological zone. Cyprus is considered to be a melting pot of culture, where Phoenician, Persian, Greek, and Egyptian history collides. The Paphos Theatre Project has been run by the University of Sydney since 1995. It is directed by some of the best archaeologists in Australia and attracts archaeologists and students from all over the world. The project aims to investigate the importance of theatrical performance in Hellenistic and Roman Cyprus and the urban layout of the ancient capital of Cyprus.

The theatre has had many lives and is a very rich site for archaeological discovery. Having a lifespan of over 600 years, it reached its peak during the late 2nd century AD where it hosted over 8,500 spectators for theatrical performances (possibly by popular writers such as Aeschylus, Sophocles, Euripides and the comic writer Aristophanes). The theatre was abandoned in the late 4th century AD, likely due to a devastating earthquake. 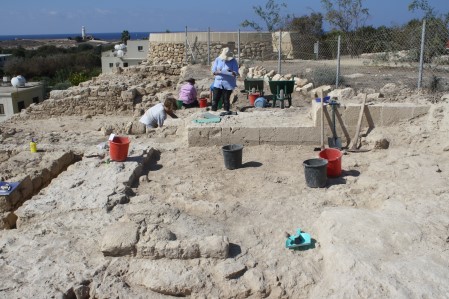 This is the fourth-time Taryn has travelled to Cyprus to be part of the project and this year she oversaw one of the trenches located at the top of the theatre seating. Taryn’s role involved supervising five student volunteers, teaching them excavation techniques and how to interpret the finds.

The process for the first half of the day involves starting at sunrise, excavating using picks and shovels, and using trowels and dustpans for more detailed work. The afternoon is made up of cleaning, pottery washing, then sorting the finds chronologically, laying them out to dry, and taking photos and drawings.

The aim this season for Taryn’s trench (16A), was to reveal more of the medieval walls, and the possible Roman platform found in this location in the 2014 dig season. Some of the walls may even date back to Hellenistic times (a period between 323 BC and the emergence of the Roman Empire).

The excavations indicated that this area may have once formed the interior of a late medieval or ottoman building. The foundations of the walls (1 m across with one section carved from bedrock) suggest that this building would have been quite substantial (possibly a large warehouse). Large amounts of funnel-shaped sugar moulds and sugar jars were also found throughout this trench and the adjacent trench indicating that this building may have been used as a sugar warehouse. Cyprus was a major producer of sugar during the middle medieval period through to the 16th century until the rise of Caribbean sugar production.

In other trenches the team reached the Roman Road which measures 8.4 m across and was possibly lined with columns. Numerous wall foundations belonging to multiple chronological phases, and several medieval rubbish pits were also discovered. The team also uncovered buckets upon buckets of pottery as well as bone needles and medieval coins over 800 years old. With the sheer number of finds, the trip this year was cumulatively very interesting.

For Taryn, this project was exciting as she visited all the famous sites she is studying for her masters on the archaeology of trade in Cyprus during the classical period, as well as mentoring the students and seeing their thrilled reactions to finding things. Watch this space, more about the team’s discoveries will be revealed once research papers from the 2016 project are published.